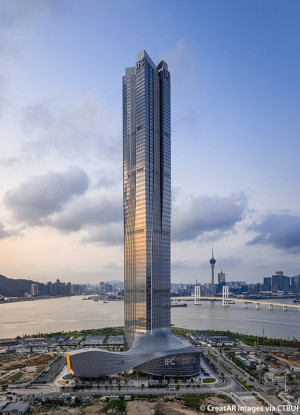 Hengqin International Finance Center is a pioneer development on Hengqin Island in Zhuhai, which, as part of the Pearl River Delta mega-region, is in the process of developing into a financial center. When completed, the tower will function as a focal point for the growing central business district. The tower is comprised of four volumes that shoot up out of the podium at its base, meant to symbolize the convergence of Zhuhai, Macau, Hong Kong, and Shenzhen—each major cities within the Pearl River Delta.

The building draws inspiration from Nine Dragons, a well-known thirteenth century painting from the Southern Sung Dynasty in which flood dragons—mythological Chinese creatures—emerge commandingly from the sea. In ancient Chinese literature, flood dragons are magical creatures capable of invoking storms and are often used to describe an emergent power—an apt symbol for a building devoted to the development of an experimental financial zone.

At the base of the tower, a huge canopy envelops the building’s entrance and sweeps upward. This fluid design allows the retail podium to merge with the tower without an abrupt transition. In this way, the roof of the podium also forms one of the tower’s elevations. The façades are clad in glass and metal panels. As they rise, each of the four components exhibit slight undulations, which gives the impression that they are weaving around one another, a visual allusion to the building’s inspiration. Each section has its own roof, with a roofline slanted towards the center of the building—a symbolic convergence of the nearby cities. Hengqin International Finance Center’s unique design is worthy of its prominent status as the focal point of the fast-expanding Zhuhai development.